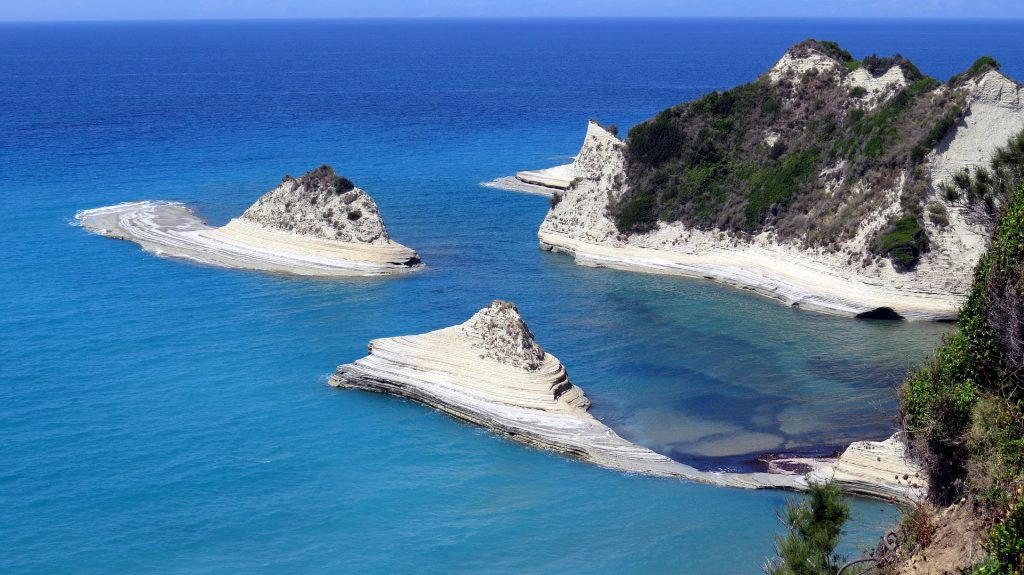 Cyclades Islands map = among the most famous islands of Greece, southeast of Athens in the Aegean Sea. There are about 220 and among the main islands there are Amorgos, Ios, Milos, Naxos, Paros, Santorini and Mykonos, Andros and Folegrandos. What to see in Santorini and in the beaches of Mykonos AKA the most famous destinations of mass tourism, the best choice for those who want to party and pull the small hours making life mundane. Island of volcanic origin, Milos is also part of the Cyclades archipelago. Defined “Island of Colors” for the color effects of its waters, beaches and rocky landscapes. Despite being well known and loved by tourists, it has not yet been completely stormed. The island of Patmos is one of the most spectacular Greek islands of the Dodecanese: the climate is exceptional with a very long summer, with peaks of 35 degrees but beaten by a constant and light wind.

The Ionian Islands in Greece identify the group of islands that rest on the Ionian Sea. The largest is the island of Corfu to-te-mi destinations for low-cost travel. If you want to feel at least once in life Ulysses you can not however visit the island of Ithaca whose literary fame does not correspond large tourist influx because of its “rocky” but it is worth visiting for the beaches of rare beauty especially if you want a holiday of total relaxation. Also the north side is a maze of coves, bays, of fishing villages like Firopotamos, Mandrakia; to see the sand crescents of Mikitas, Aghios Kostantinos or Pachena Beach. Rhodes city attracts for its history that, like Ithaca, has its roots in mythology: its beautiful medieval center is beautiful. Ideal for those who want to combine a holiday in Greece with a culture, relaxation, sea and fun.

Greek Islands = Zante what to see. Among the most beautiful Greek islands, from the incredible reflections of the water of its Blue Caves or the splendid view from the Venetian castle of Bochali and the white sand with a lot of wreckage between two horseshoe rock faces. Beaches of Cerigo = among the most isolated Greek islands, here tourism is not yet very developed, an ideal destination for a journey of peace and tranquility. The beaches of Skiathos? In the Sporades archipelago Skiathos, the island of Greece recommended for its monasteries, the medieval remains of Kastro and the naturist beaches. Equipped with an airport, it takes about an hour by ferry to reach Skopelos, the largest of the Northern Sporades archipelago, also unknown to mass tourism but rich in greenery and beaches of rare beauty.

To the south of the Peloponnese, instead, we find the island of Khytera or Citera beaches where mythology tells the story of the goddess Aphrodite whose beauty is reflected in the Venetian and Byzantine architecture and in the breathtaking natural views of caves and waterfalls. Greek Islands = Crete totemic destinations. The largest of the islands of Greece, Crete, with over one thousand kilometers of coastline where to choose their destination. With its artifacts kept in the archaeological museum of Heraklion but above all its gastronomy really to be tasted and savored.

Francesco
0
Tags :
"I want to move forever on the Greek islands and THESE are the reasons"