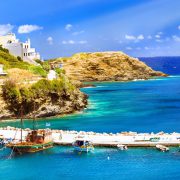 Greece mania: a trip to Kea, the fairytale island

Travel to Greece. On the Pelion peninsula and in Rhodes. Between secret beaches,...
Scroll to top